Climbing Mulhacén was another surprise of my expedition. The hike was really long and I was surprised by a lot of snow. At some spots I would actually be grateful for crampons. I also felt like I was on both the Moon and Mars? Why? Follow my journey to Mulhacén.

DISPUTE: Before I describe my ascent to the mountain Mulhacen, I must first explain the issue of Spain’s highest point. I was standing in front of a big dilemma. Should I climb Pico del Teide in the Canary Islands or Mulhacén in Sierra Nevada in the south of Spain? The goal of my expedition was to ascend the highest mountain of every EU country, but at the same time mountains that are a part of Europe. Since the Canary Islands belong geographically to Africa and since the area is an autonomous territory I  decided to climb Mulhacén, although this mountain is lower than Teide.

My journey to Mulhacén started in Salamanca, where I returned my car on the road from Portugal. After the excellent Spanish motorways, I was impressed by another mode of transport. I had to get from the very northwest of Spain to Malaga in the southeast across the whole country. The journey was over 700km but thanks to Spanish high-speed rail the journey took only 5 hours and 20 minutes, including two transfers. Simply amazing. Can we build trains like this across the whole Europe, please?

The trains are adapted to this and also properly controlled. Before boarding the train, the check was more or less the same as at the airport. I also got a similar meal on the train like on the plane. It was a pleasure to travel like this.

After a busy day when I got up at sunrise in Portugal, drove halfway through Portugal by car and still got to the south of Spain by train in the evening, I decided to relax for two days on the beach in Malaga. I did not choose the best destination because the beach in the city was dirty. In addition, I found out that I arrived to Malaga during the coldest summer in the last few decades. When I went to the beach, I didn’t even go for a swim because it felt cold and dirty. I rather stayed in my sweater. 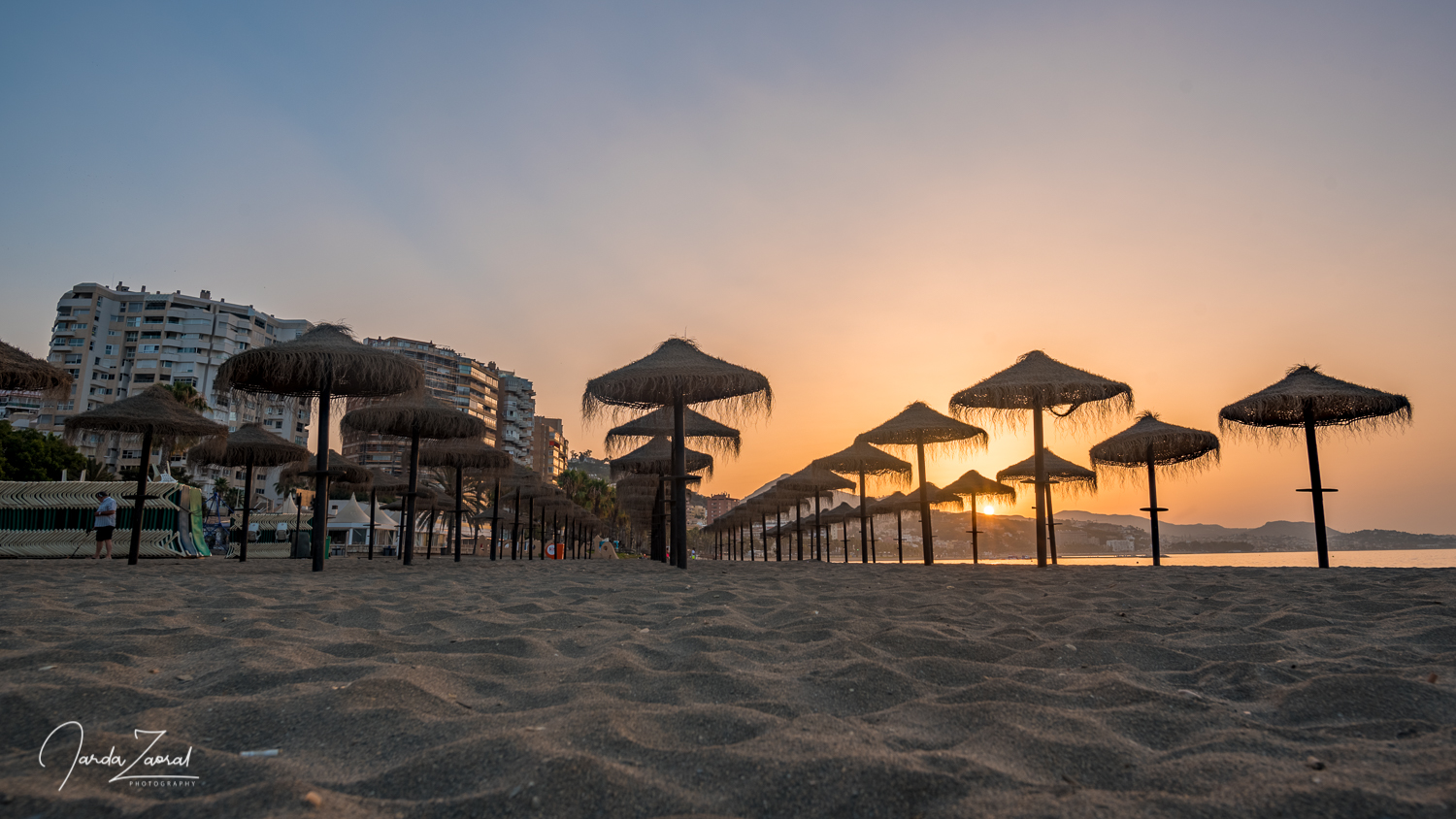 The cold beach in Malaga

Instead of bathing, I chose to relax by consuming Spanish delicacies. For breakfast, I tasted churros with chocolate, a Spanish omelet for lunch, and a luxurious Spanish serrano ham for dinner. My gastronomy day ended up by visiting three bars serving the best sangria in town, tinto de verrano and a local dry cider. A good way to load energy for the next mountain.

But I’m not a food blogger, so let’s focus on what followed. I borrowed a car and headed to my 18th peak. The starting point of the hike is not far from Malaga. In 1.5 hours I arrived to the ski resort Pradollano in the Sierra Nevada mountains. I parked the car in Hoya de la Mora, the best spot to start.

Spend a night at Bivouac Carihuela

The first part of the trail runs right next to the ski lifts and ski slopes. It leads to Spain’s second highest mountain, called Pico Veleta. My goal was to sleep nearby this mountain in a smaller shelter called Bivouac Carihuela and go to the top of Mulhacén early in the morning. Unfortunately, I did not completely properly estimate the length of the initial hike. From the parking lot I thought I’d be up in an hour but it took much longer so I arrived after dark. It’s a shame because the sunset was amazing. The red sun together with the reddish-tinted soil created an amazing spectacle. I felt like I was on Mars. What a pity I did not use my camera and decided to get to the cottage as quickly as possible instead. Now, I have to come back one day just because of this Mars picture!

Coming to the Bivouac Carihuela late had at least one advantage. I could see shining Granada

When I reached the cottage, I was surprised. Everyone was asleep. What happened to the famous Spanish fiesta? Did the Spaniards get tired of the hike so that they fell asleep at 10 pm? However, when I started to unpack my sleeping bag to sleep, two younger tourists Alejandro and Pablo got up and asked me: “We can’t sleep. Do you wanna join us for a few beers?” I was not really tired so I nodded.

It showed up that they were having a big headache, probably due to high-altitude illness. It’s not a surprise. Pico del Veleta is 3 398m. Based on my previous experience I recommended them: “If you feel a big headache you should actually descent down a few hundred meters. You can sleep in another shelter close to the starting point of the hike. You will feel better.” However, the Spanish teenagers didn’t listen and came up with their own solution. They opened their beers and started to smoke. Neither did they refuse my plum brandy. After a while, they surprisingly told me  they feel much better and after our little party they slept like babies (not the crying ones). 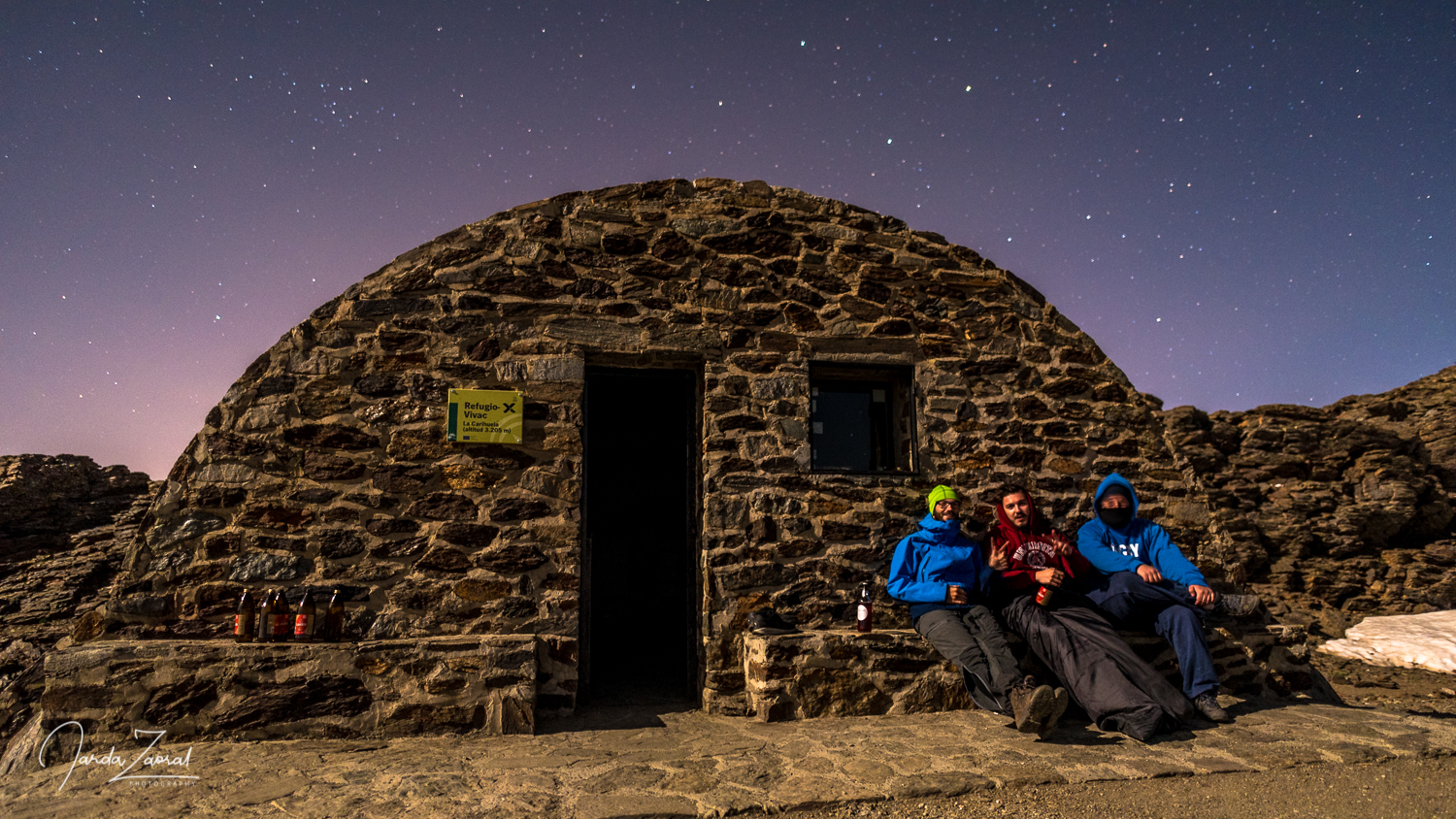 A little party never killed nobody

Hiking on the Moon

I didn’t take the fiesta so seriously so I was able to get up at 4:30 in the morning. Unfortunately, my new friends were not able to do that. Their excitement to join me somehow disappeared. According to the map, it looked like the top is just two hours far so I didn’t spend much time having breakfast and decided to go. Shining stars were leading me to Mulhacén. 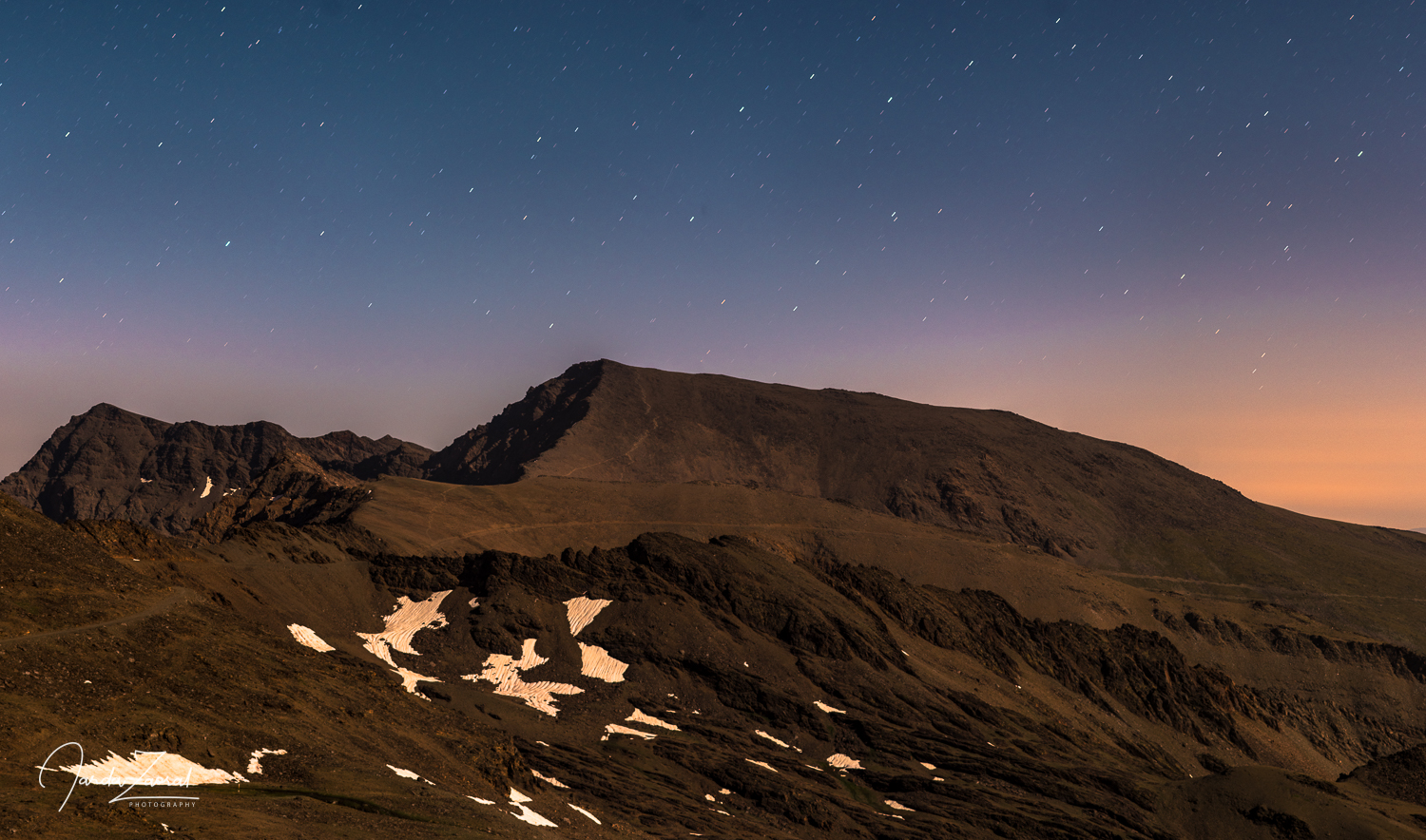 I was surprised by the large amount of snow on the way. Arguably, the last winter was as strong as this summer was weak in Spain (Later this was confirmed by a local mountain guide. There was much more snow during this time of the year than usually). I would actually be happy having crampons with me when crossing some snow parts. Who would have expected that?

The road wasn’t interesting and Mulhacén was still far away. I actually felt like I was on the moon this time. A large black inhospitable environment with no vegetation. If you walk on your own in such an environment and in darkness it is difficult to find motivation to go fast. I was slow and due to my low speed I came late to the top, one hour after the sunrise. 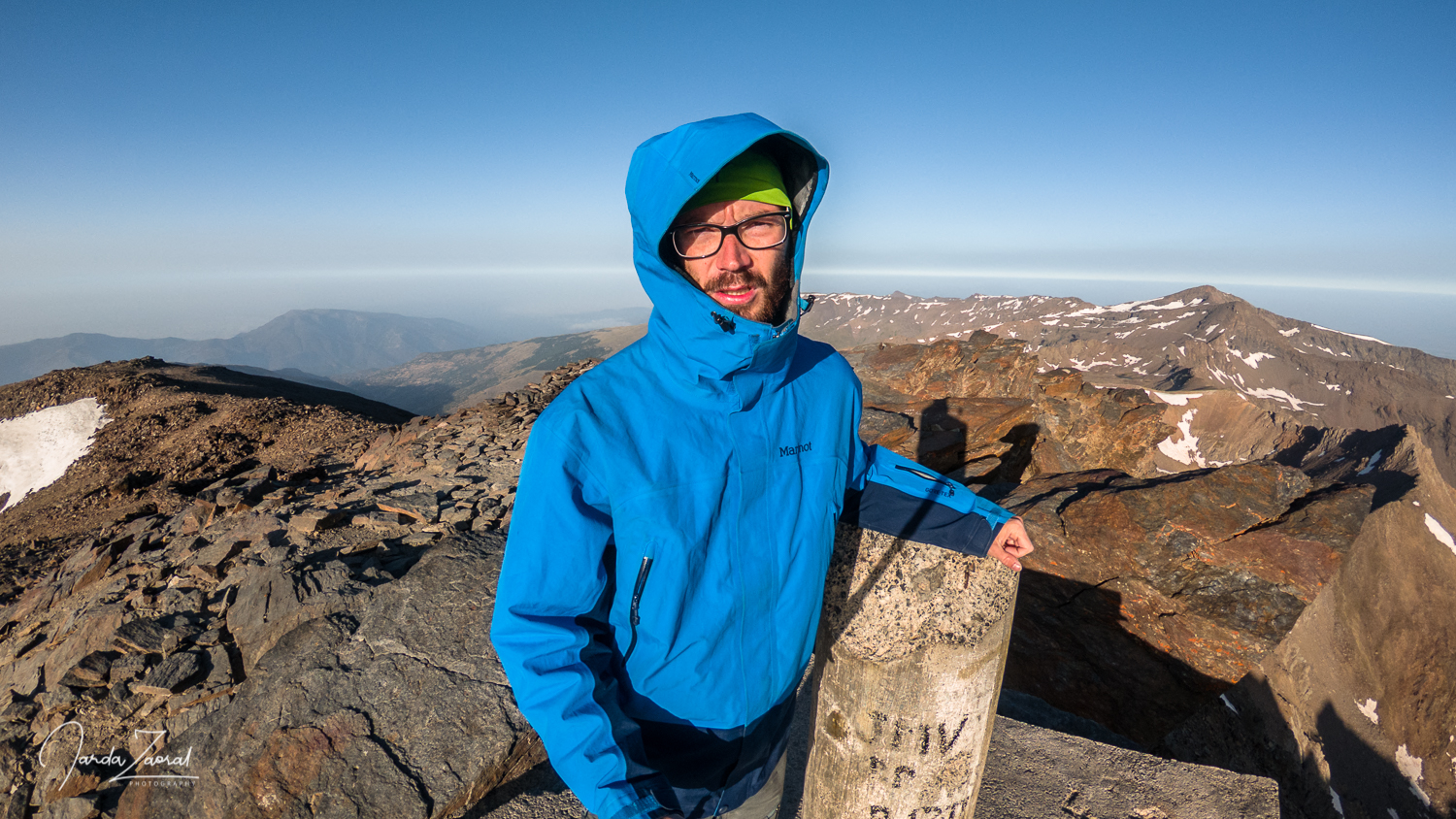 The freezing top of Spain – Mulhacén

Freezing on top of Mulhacén

I spent only a short time on the peak. It was really cold. It became the coldest mountain so far. Even the famous hot Spanish sun didn’t warm me up. After a classic half-hour photo shoot I headed back to the car. The journey back seemed to be even longer, but I was in no hurry. I stopped several times on the way and enjoyed the awakening nature. When I reached the shelter Pablo and Alejandro were still sleeping.

I planned a few extra days for Spain because I had never been to Andalusia before. I stayed a day in  Granada where I was mostly amazed by local tapas which I got always for free when I ordered a drink. All in all I paid 6 euros for three drinks and I still got amazing food along. This kind of service could work everywhere. I had also a perfect view over Alhambra from my accommodation.

The famous  palace and fortress Alhambra built in 889

One day later, I decided to check the famous most dangerous trail in the world – Caminito del Rey. The walkway is built height 100m above a deep canyon. Previously, the trail was opened only for adrenaline sportsmen who could use via ferrata. However, after several accidents it was closed and today there is a safe path for all tourists. I was a bit disappointed how much touristic this trail is but it was still worth to see. Amazing canyon. 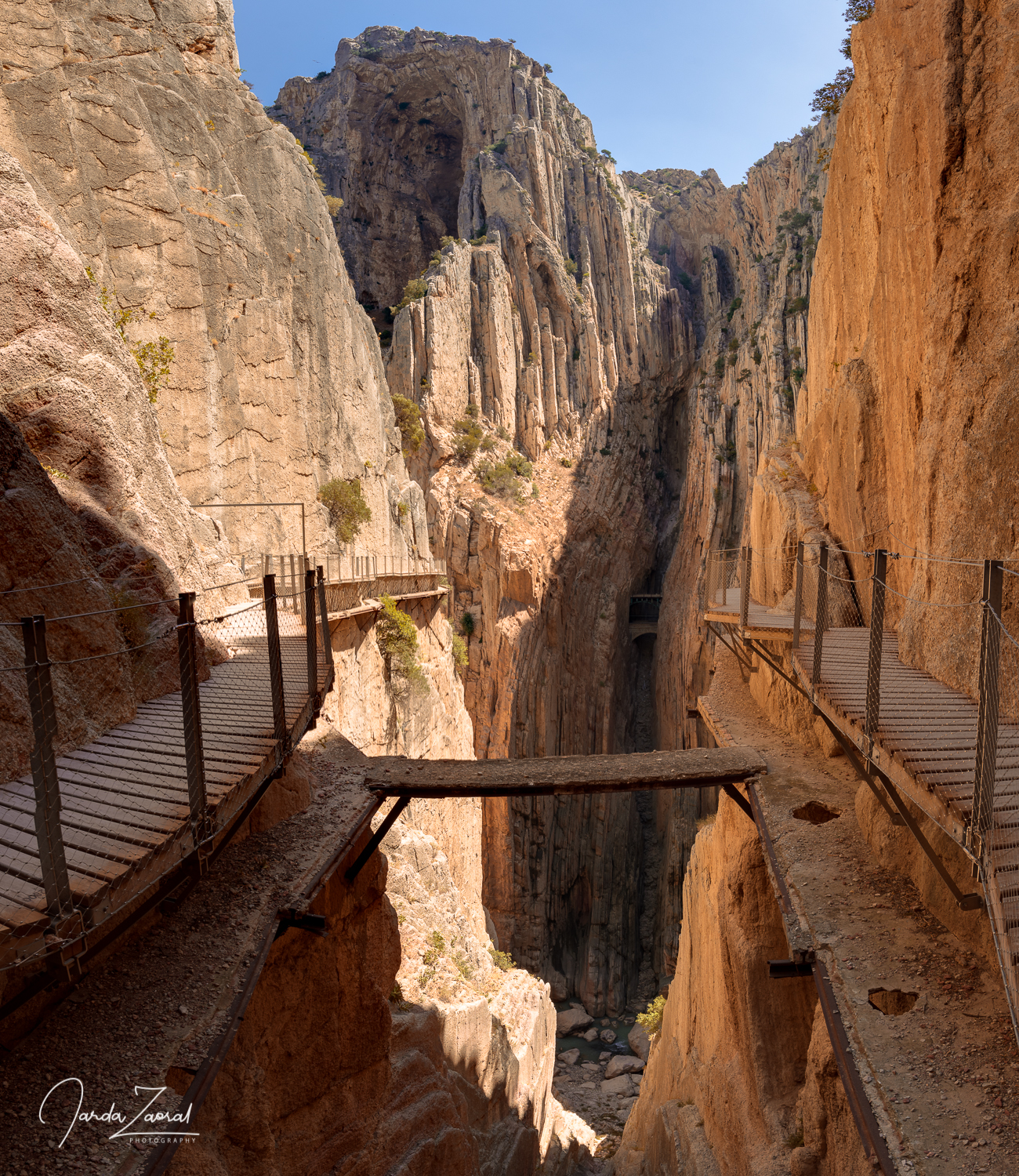 The last place which I visited was the city of Ronda. It lies on two cliffs linked by a famous stone bridge and I liked it a lot because there was a lot less tourists. Then I just continued back to the airport in Malaga to fly for the next peak.

I thought I will have time for swimming before my flight. However, I was late with car return so I had to skip it. Therefore, I  think I became the first tourist who came to Spain for a week and didn’t go for a swim.

My tips for the mountain Mulhacén: