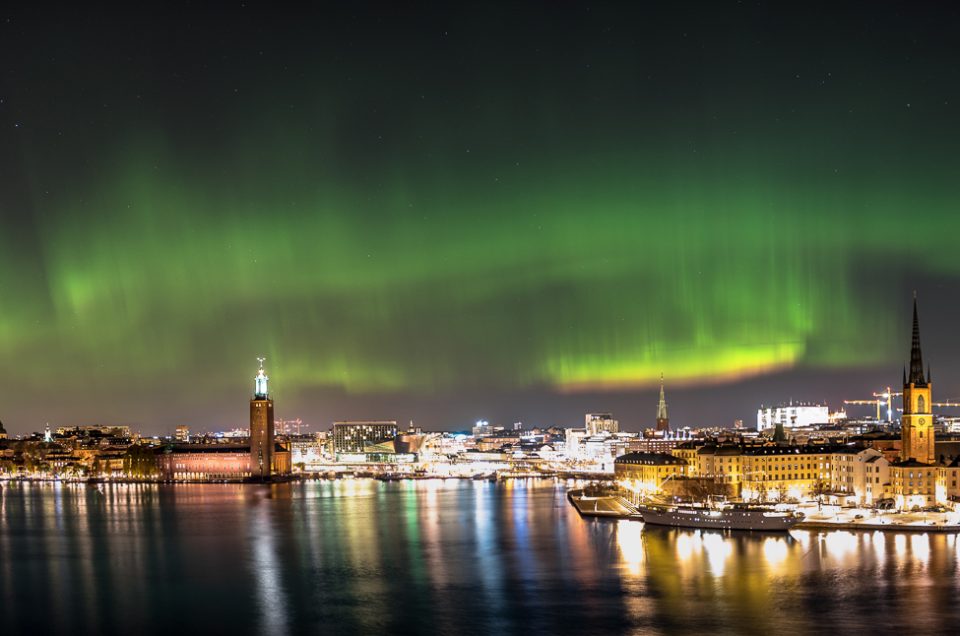 There was a wonderful northern lights show on 14 January 2022. It was a night which people in Stockholm and actually the whole Northern Europe (other parts of the world had daylight, sorry!) will remember for a long time! We witnessed one of the strongest northern lights displays in years. It was actually the strongest one I’ve seen since I moved to Sweden 10 years ago! The sky was on fire and I could even see the dancing red aurora with the naked eye! Would you like to see similar northern lights in the future? Follow my tips.

I managed to record the show on my camera and my video was seen by more than 50 000 people on Facebook. I got many nice comments but unfortunately also many sad messages: “I missed it. When and where can I see the northern lights next time? How did you know there will be aurora borealis that day?” I decided to help out and write this guide. This is all you need to know.

What are northern lights?

To understand when and how you can witness northern lights, you have to know first what the lights actually are and how they are caused. First, let’s take a look at the official Wikipedia definition:

“Auroras are the result of disturbances in the magnetosphere caused by solar wind. These disturbances alter the trajectories of charged particles in the magnetospheric plasma. These particles, mainly electrons and protons, precipitate into the upper atmosphere (thermosphere/exosphere). The resulting ionization and excitation of atmospheric constituents emit light of varying colour and complexity.”

In simple words: northern lights are caused by solar activity which reaches our planet via charged particles and they react with the Earth’s magnetic field. The reaction causes lights nearby the magnetic poles of our planet (which are nearby the actual North and South Pole). The animation below will make it even more clear:

Why is it important to know this to forecast northern lights? It’s easy. By observing the Sun we can predict the aurora activity. Strong northern lights usually occur after unusual activity on the Sun (to make it simple let’s call them eruptions) and it takes approximately 3 days until the charged particles reach our atmosphere and cause the northern lights.

What time of the year is the best to see northern lights?

This is a very frequent question on social media under northern lights related topics and I often see random answers such as: “You can see them from January to March because it’s the coldest.” Bullshit. In fact you can see aurora borealis basically anytime when the sky is dark, when there are no clouds, and when the Sun is active.

The Sun doesn’t really think of when to make the largest eruptions based on the position of the Earth. The solar eruptions happen through the whole year, so be ready to see aurora anytime when there is dark sky if you live in Stockholm or even more north. I have seen the earliest aurora in the middle of August and the latest at the end of April. Here you can check the sunrise and sunset times for Stockholm. The auroras can be seen during night and astronomical twilight.

If you are making a trip with the main purpose to see aurora, then plan it so you have a statistically bigger chance to see northern lights. Remember:

Where in Sweden is it the best to watch northern lights?

The auroras usually occur behind the polar circle but are more rare in the south. The geomagnetic activity is measured by the so called Kp index. It is a scale of numbers between 0-9. Using this scale, it is easy to determine what Kp number you need to have a chance of seeing auroras where you are (read more about the index here). These are the values to follow for cities across Sweden.

The Kp 1 is common. It means you can see the northern lights in Kiruna almost every day. The more south you are, the less often you will have the chance. Keep in mind that these numbers don’t guarantee northern lights. Forecasts are not 100% correct and there are of course exceptions. I have seen northern lights in Stockholm when there was Kp 3 shown in the forecast but I didn’t see anything with Kp 6. There are better tools to follow. See below.

What app is the best to forecast northern lights?

I have downloaded ten different northern lights apps and followed multiple websites and the most important thing to say is: it is very difficult to predict the northern lights activity and the apps are often wrong. The long term forecast is very unreliable. Since you know how the northern lights occur you understand this now. It is difficult to predict exactly when the Earth is hit by charged particles. That’s why it is better to follow short term forecasts and ideally live observations. I recommend following:

I fell in love with aurora borealis when I moved to Sweden 10 years ago. I was studying at Umeå University and since the city lies pretty far in the north there is often a high chance to see aurora. Hunting northern lights quickly became my favourite hobby. I had a lot of great experiences which I could use later when I moved to Stockholm. Here in Stockholm I have seen many auroras too but two of them stand out: the one which I introduced at the beginning of this article and also in 2017. That time I managed to photograph an amazing panorama at Monteliusvägen.

That day my fiancée and I were waiting for two hours in freezing temperatures. She later decided to give up and went home. Luckily I stayed and after 10 minutes the amazing display began. I quickly called her to come back and she thought I was joking. It took some time to persuade her that it was not a joke. She ran back just in time to witness this beauty.

Remember, this doesn’t always happen. It happened many times we saw nothing. My success rate to see aurora in Stockholm is only one in four! You have to try, try and try but once you manage you will never forget the moment.

How do I decide if I go northern lights hunting in Stockholm? I check the above mentioned sources daily. It only takes a few minutes and you can see directly if there is a chance that day. If I see a possibility for the upcoming night (meaning the Kp 5 or higher is expected) I prepare my equipment. Besides camera and tripod, we always bring warm clothes, hot drinks and we often barbecue. I often go hunting with my fiancée or with friends. Even if we don’t spot any northern lights that evening we still have a great time! Remember, patience is the most important. The longer you stay outside the higher chance you have to see the northern lights.

What is the best location to see aurora (not only in Stockholm)?

In general, it is important to have a clear view over the northern horizon and to be on a dark spot. I recommend being on the southern shore of a large lake or sea with a great view to the north. In Stockholm Lappis beach is perfect for instance. I also like the Monteliusvägen viewpoint but there is a big problem. There is a lot of light pollution in the city center which makes it more difficult to see auroras. Try to find a spot as dark as possible. The best area nearby Stockholm is the archipelago. Check out the Light Pollution Map.

Next article: How to photograph aurora?

Do you have any questions about aurora? Let me know and I can add it to my article. For next article I am planning to write about how to photograph and film aurora so you can take nice picture and movies. Keep posted! In the meantime you can check out my expedition during which I climbed the highest mountain of every European country.